Records show that Knowle Ladies Hockey Club (KLHC) started life around 1919 and in those days matches were played on a piece of land between Redcatch Road and Broad Walk known as ‘The Meadow’ or ‘The Paddock’.   The land was likely to have been used to keep or exercise horses and was probably owned by St Gerard’s Church in Talbot Road; certainly old team lists and minutes show several KLHC members were also members of St Gerard’s parish.

There was a huge race course at the Wells Road end of Broad Walk before it became first a golf course and then Knowle Cricket Club. In 1922 KLHC applied to Knowle Cricket Club for permission to play hockey matches on the cricket ground.  Cricket Club records show this was discussed at their 1922 AGM where it was agreed that KLHC could play their Saturday home matches on their ground.  Knowle Ladies played hockey at the cricket club until the 1990s when it was decided to move to an all weather pitch.

As the photo shows hockey attire was very different to the kit used today. Note the sticks too.  Some of us playing today remember those hockey sticks!

In those early days goalkeepers played less subs and telegrams were used to inform teams about cancelled matches!

Knowle Ladies Hockey Club was first affiliated to the All England Hockey Association in 1924.

Knowle Hockey Club now call Merchants Academy Sports Centre in Withywood home, and we are celebrating our Centenary this year!

Some soundbites from old minute books:

Sept 1926  Subscription to be 12/6 per year, new members to be elected to play after first practice match. Regulation uniform must be worn. 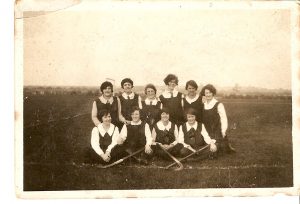 Sept 1942  A tennis tournament – American style – was held during the summer.  Two very enjoyable hikes were also held at the close of last season 1941/42.

June 1945  It was suggested that during July schools should be contacted in order to gain new members from girls just leaving; it was also decided to advertise in the local papers.

May 1957  The treasurer reported that the club was a little better off this year.  It was recommended that subscriptions should be paid by the first Saturday in December, any defaulters should pay an additional 2/6 (two shillings and six pence). As the uniform needed neatening it was recommended that an aertex type of blouse should be worn with short sleeves and a collar.

[A big thank you to Liz Fox for this article]