There are plenty of occasions in every game of hockey where players need to be aware of the 5 metre rules.  So do you know when these occasions are and do you actually know how far 5 metres is?

Some will tell you 5 metres is about 5 big steps, ignore these people, a simple look at your teams tallest and shortest players and you’ll realise 5 big steps means different things to different people.  As a general guide consider 5 lengths of your hockey stick the appropriate length.  (5 x a standard 36.5 inch stick is actually 5.4 metres which just exceeds the requirement).

There are plenty of other clues on the pitch and several marking you are familiar with measure exactly 5 meters.  In the half pitch diagram below, pitch features “E” (the space between the dotted line and the D), “H” (from the posts to the first notch on the backline) and “P” (from the backline to the nearest notch on the sideline) are all 5 metres. (Officially “H” is 2.5cm short, but let’s not quibble over an inch). 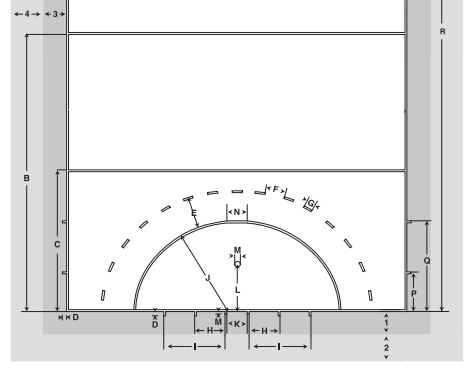 So when is this stuff really important?  The simple answer is free hits.

If you’re playing and are unsure you are keeping the regulation distance don’t worry, the umpire will start saying (in the usual raised voice manner) “5 metres please!”  Be careful not to keep falling foul of this as the umpire can advance the play 10 metres up the field or penalise you with cards for persistent breaches of these rules.  You can always do what some umpires do, they sometimes stand on the D before the match and see how far the dotted line is to get a sense of perspective, strangely enough some pitches “feel” bigger than others.

If you have questions regarding this article or want to suggest topics for future Umpire Corner posts either drop me an email or leave a comment below.